We open with a Frenchman who sounds exactly like Pepe le Pew telling us if he overseasons he will be in big trouble with zee judges – wait! Sacre bleu, I am on the wrong channel! Forget this Hotplate nonsense, let’s cut to the mansion.

Heather is predicts the next date will involve rockets, monkeys and a circus (…ie, your standard EOM drinks :P).

Bintang Bali Bec scores the date and frocks up wearing a skinned leopard dress. She is blown away when Sam arrives by chopper; literally, her dress flies up over her head. She’s not having much luck as she is then splashed from head to toe by a random car going through a massive puddle, probably driven by maniacal Sandra still on the run from the asylum.

After last year’s “let’s take Laurina skydiving during a thunderstorm” debacle this year the date is … INDOOR skydiving ie. … a wind machine they borrowed from the set of a Beyonce film clip. The date concludes with Bec dressing up in her best Amish frock (honestly, what was that dress about?) in a gazebo brought to you by, you guessed in, Spotlight.

After being imprisoned in the house for 2mths Bec has forgotten how to say anything other than “who do you think will get a rose” so she resorts to a “conversation starters deck of cards”. This does not go well and forget that 4mins pash on the Harbour Bridge – folks we have a new world record – FASTEST TIME FOR GIRL GETTING DUMPED ON NATIONAL TV – at the 16mins mark of the episode Sam declares she’s just not up to harem standard and here’s a car I prepared earlier to whisk you away from my sight as quickly as possible. Poor Bintang Bec doesn’t even get to go home and pack!! This year’s Bach is brutal.

Next up Sam does a surprise breakfast visit to the mansion, aka The Bachelor version of “Stars without makeup”. He turns up with a fruit basket and is greeted by Heather’s bum flap (she’s in a onesie). Emily is too busy recovering from dying her hair/spending hours asking the mirror mirror on the wall who is the fairest of them all and has to be dragged down by her breakfast scarf to eat some of Sam’s “man-cakes”.

Date #2 goes to Sarah! Unlike Schnitzel’s date, this time Sam sends a water taxi to pick her up. But never fear, when she arrives at the Bach Pad boatshed, he is not wearing socks. Sarah is apparently a bit of a wino so he gets her to do a blind tasting. 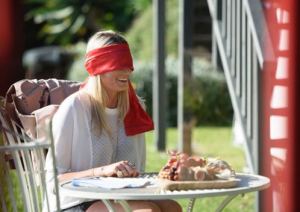 In classic pun style she declares she likes the rose’ best even though I’m pretty sure he snuck some Passion Pop into the mix. She scores a wine and a kiss and this girl may be the dark horse peeps!

Cocktail party time, we know this as Osher has borrowed Ron Burgundy’s suit for the night. He whisks Sam away to meet 2 NEW INTRUDERS!!

First up is Lana the Golfer. For one fleeting yet amazing moment during her background clip I think she actually knows how to whistle eucalyptus leaves (admit it, we’ve all tried it as kids!), but they cut just before she can bust out a bit of Banjo Patterson. Maybe playing the spoons will be her surprise talent in upcoming episodes.

She demonstrates to Sam how to play golf and he gets his ball straight in the hole. Literally that is what she said.

But it doesn’t stop there – the girls know, just like with cockroaches, there’s always one intruder you can’t see. And boom – in walks the new Rachel M. It’s hard not to see her though as she is more plastic and neon than an oompa loompa with the world’s fakest tan. She’s a slashie – flight attendant/food blogger aka an Instagram dream. Sam is just annoyed he once again has to tell 2 blondes apart as he only just got rid of balloon Rachel but clearly they have a quota to fill.

Emily pulls Sam aside. She thinks she is a goofy open book who has never been rejected, but all he can see is prissy blank pages. Maybe you need to hold her up to UV light to read the invisible ink of the deep words. Straight Up Sam tells her their connection is up and down like a yo-yo, except he means one of those ones that gets a knot in the string and won’t come back up again no matter how many times you try to do Walk the Dog.

At the rose ceremony, both intruders make it through and Emily #cantevendeal that it’s between her and her arch enemy Nina Two-Face!! She storms out rather than being rejected for the first time ever. And Straight Up Sam just lets her go!! 10pts to him for not giving into her DRAMA, this might be the first time we’ve had a Bach with a Backbone! Eh-bro kindly tries to go after her but clearly Emily just tries to claw her eyes out in response as that bit is never shown on air. Sam declares the last rose was always meant for Nina Two-Face just as we cut to Emily driving off awkwardly saying that rose totes woulda been for her. She can’t believe she beat Nina in Mario Kart but not in the love Hunger Games.