Osher arrives in his best cowboy shirt and Ken doll hair to tell us we have reached the Top 5! 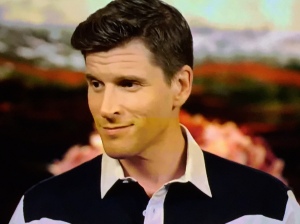 And that Sam is shipping them all off to a beachside mansion for the weekend. It’s torrential rain but never fear, Heather has packed her trusty waterproof raccoon thrift shop hat.

Luckily Spotlight and Dusk got the keys off the agent first and have gone full throw rug n lantern on the joint. They’ve even gone #nextlevel Jamie Durie with a patch of fake grass on the patio. Outdoor rooms are in peeps.

This ep they all get 1-1 dates with Sam, and Lana is first up. Not to be outdone in the headwear department by Heather, she is donning the head of a bear she recently scalped in Iceland. She even kept the EARS. 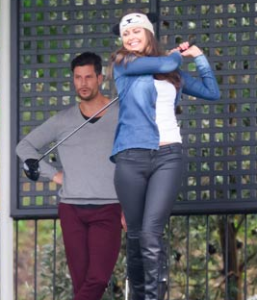 “Did you club that bear?”

The one-upmanship continues at the driving range as she hits the target first shot. Sam asks for some ‘coaching’ and quickly turns golf into a ‘contact sport’ and Lana goes even more goggly-eyed than normal (get me the bucket now). Naturally all this putting is followed up by some couch time during which Sam demonstrates some serious ‘man-spreading’ (it’s in the Oxford dictionary now, look it up!) in his red pants and reveals he is attracted to ‘girls that are smarter than him’… ie, everyone. He tells Lana they would ‘never run out of things to say’ … because basically their entire conversations will continue to just consist of Sam telling her how into her he is.

Lana finally scores a kiss and Sam actually says out loud ‘that was the last thing I had to test’. Which makes me think he had to do some serious testing with Nina’s Two Faces on that bridge for a whole 4 mins and sounds like she flunked.

Sam then goes all out for Schnitzel on her date – strolling through the torrential rain wearing matching wellies. (Also, I’m pretty sure at this ‘beach house’ it’s a house rule that everyone has to wear pleather somewhere on their person at all times?). Schnitty then shares some cute photos of her daughter, back at the house where the ink won’t run from the downpour. Sam looks increasing FREAKED OUT about the thought of entering an actual real life relationship. Warning bells Schnitzel – he might parma you off!

Heather brings her raccoon hat and every-colour-yarn stripey jumper (she really is looking more and more like she stepped out of Mackelmore’s Thrift Shop music video each day) to their teppanyaki date, where the chef can’t hide how incredibly impressed he is by Sam’s skills: 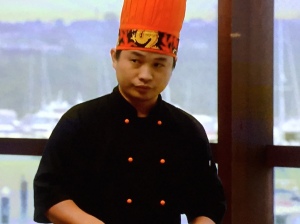 “Of all the teppanyaki in town, they had to come to my place didn’t they?”

And after months of Sam declaring Heather was basically the woman of his dreams – BAM – one look at Lana’s “eyes” and now he’s telling the camera he’s not seeing any romance and she’s about to be FRIEND-ZONED!! (Just like with Jessica the Unicorn last year, producers have strung us along and she will not win!).

Sarah decides to amp up this head adornment game by wearing the feathers of a tropical bird she recently plucked: 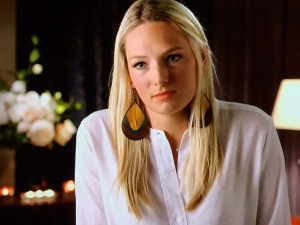 And then OMG – Sarah makes the quote of the season when they arrive at the Spotlight room and she sees the spread – “I feel like I’ve had so much CHEESE with you”. Drop the mic, Sarah. Sam then takes a different form of spread,  man-spreading, to whole new heights: 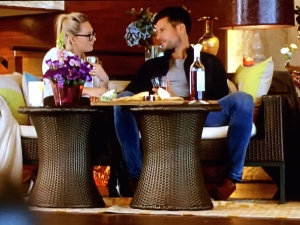 “Yes, there is a whole table between my legs.”

Nina then scores the insulting ‘fishing date’ during which he stands so far apart from her you’d think he was expecting to reel in Moby Dick between them. Poor Nina thinks she is still in with a chance but the writing is on the wall and all over Sam’s face. He mentions home dates and she says she is worried ‘her mother would try to cut her lunch’ (and she doesn’t mean the Wonder White crusts peeps). Sam almost falls in the water then makes the dismissive comment that he’s ‘never had an outspoken girlfriend’ before ie. … someone who doesn’t spend an entire convo telling him how into him she is.

AD BREAK TIME and we see a peek at one of the beaus on The Bachelorette – a bumbling musician with sticky outty hair and OMG I CAN’T WAIT FOR THAT SWEEPSTAKE!!!

Time to pack up the throw rugs and head back to the mansion. Heather tells the girls she basically has this thing in the bag – LITTLE DOES SHE KNOW it’s just her and the raccoons in the FRIEND ZONE. The producers try to trick us by showing heaps of footage of Sarah freaking out but this is not our first rodeo – Nina and both of her Two Faces are sent Tokyo Drifting as we thought.