Sam starts off at the beach picking up a towel that looks exactly like one of those kid’s animal ones with the hood – and for one glorious moment I think he’s taken his kids coaching work too seriously and he’ll end up with a jersey cow over his head.

Then I realise no it’s flowers and I’m not sure what is more disturbing.

The cutbacks continue this season, no fancy overseas finale trip to Simba’s elephant graveyard this year. Though he has borrowed Nina’s Tokyo Driftin’ lambo to pick up Schnitzel, who is trying to steal some of Heather’s superhero thunder by dressing in a leather bat cape. Which frankly is an upgrade from when she clearly got bored and turned one of the Spotlight throws into a handy feathered cardy:

Sam gives her the full Pretty Woman treatment – penthouse, new dress and a trip to ballet where, in keeping with theme, some mortified dancers are forced to perform a bit of Nutcracker. Then it’s back to the penthouse for a few espresso martinis – clearly this Perth girl has spent some Friday nights at The Village with ITS.

It’s then Lana’s turn, who appears to have decided to come as Jess from Toy Story with her jaunty hat. I guess Sam’s name is Woody…

Finally – a) someone gets to ride in a seaplane and b) Sam has found something Miss Iceland Culture has never done before! Spotlight wasn’t allowed into Schnitty’s penthouse but they have made up for it at Palm Beach by blinging the place up with their 1993 hanging crystals collection.

Sam ups the romance ante … with a spot of jet boat tubing. (When Lana gets to see the footage of Schnitty’s glam ballet date I have a feeling a different kind of Nutcracker may be in store for Sam). Then it’s back to the house for a poolside date where Spotlight/Dusk have joined forces – candles in waterproof lanterns. Genius! Sam has once again forgotten to pack the socks but luckily, Maybelline have finally gotten on board with some waterproof mascara so Lana doesn’t end up Kung Fu Panda when they take a dip.

Lucky last is Sarah, not wanting to be outdone in the hat stakes she shows up dressed like Miss Marple:

Which is handy, as they appear to need to go on a mission in the middle of nowhere to FIND SARAH’S MISSING PERSONALITY: 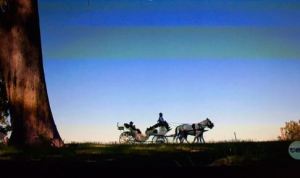 We’ve switched from Pretty Woman to Little Women now, time for some tea and scones. The date goes from bad to worse as Sarah declares she’d rather sit in silence, and takes a moment to ponder the brand of china teacup: 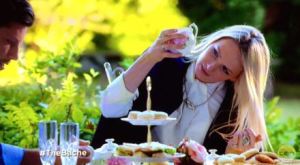 “Nup, your personality’s not under their either love” #mysterycontinues

They end the day sitting down to … you guessed… WINE AND CHEESE. Is that all this couple ever do?! Pretty sure Sarah must be lactose intolerant by now – I certainly am. Sarah unfortunately says she has her walls up. And let me tell you, the wallpaper colour is beige. Again, we can read Sam’s face:

“Hope that carriage is saddled up”

The wise folk at Zamel’s give Sam an epiphany – he can ONLY CHOOSE 1 and he realises he “doesn’t want to spend his life with 3 women”. During their video messages, Sarah resorts to red lippie as she knows it worked so well for Anna and Lou-Lou in past seasons. Osher the oompa loompa shows up in, you guessed it, his burgundy suit – gloriously self-aware, tweeting:

In a nice touch, his suit matches Sam’s tie #bromance.

Schnitzel appears to have taken her Star Wars obsession a tad too far (even by my standards :P), rocking up in the Episode IV Princess Leia outfit she once wore to a 1997 convention: 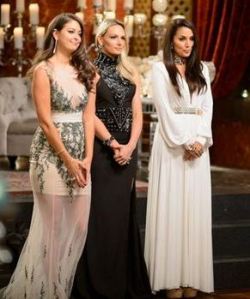 The Force is with her, and Sarah’s wallpaper gets painted over by Lana.

We are down to Schnitzel vs Lana the Golfer – Game on moles!