3 – Bananaman was such a brilliant 80’s cartoon.

5 – They are all just lazing casually by the pool in the Tuscan Villa – but thankfully today’s batch of clothes don’t look like they shrunk in the wash.

6 – Is Bingle wearing a pleather skirt and long sleeve sheer black top by the pool? I didn’t think emos went near the water. Or sunlight.

7 – Megan our Gero Girl is chosen and how does she react? By shaking herself like Shaggy Dog:

BTW is it weird that I remember this pearler:

I look forward to a Channing Tatum remake ala #Splash.

8 – Someone talk me through this image because I am flummoxed by the shift from emo to soda shop rollerskate waitress. This girl will clearly make a choker out of any bit of curtain she can find. 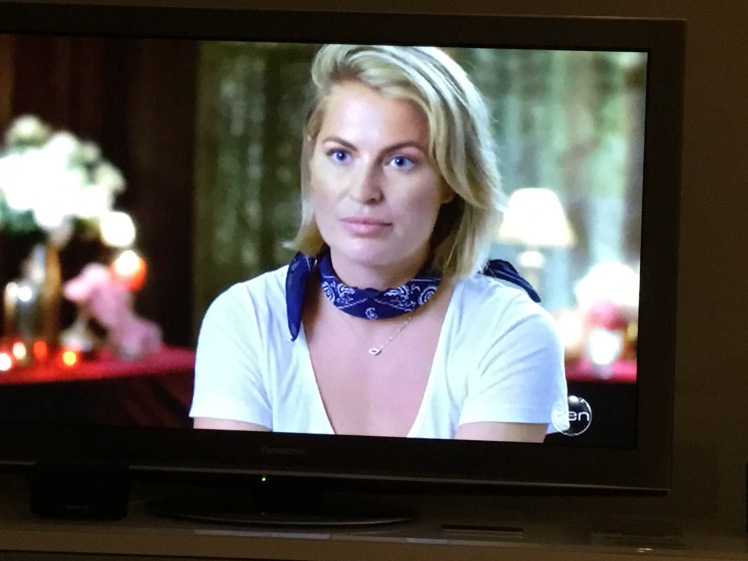 9 – I’m glad Richie thinks single dates are important – that will bode well for him after his harem disappears.

10 – Aww Richie, there was no red carpet at the Tuscan Villa sweetheart. That was just a whole lotta Spotlight fake petals.

12 – It’s the moment we’ve all waited for – Richie has rigged up his access ropes to create a Cliff Swing of Doom – but Spotlight have made it look less threatening by covering every inch in fake vines: 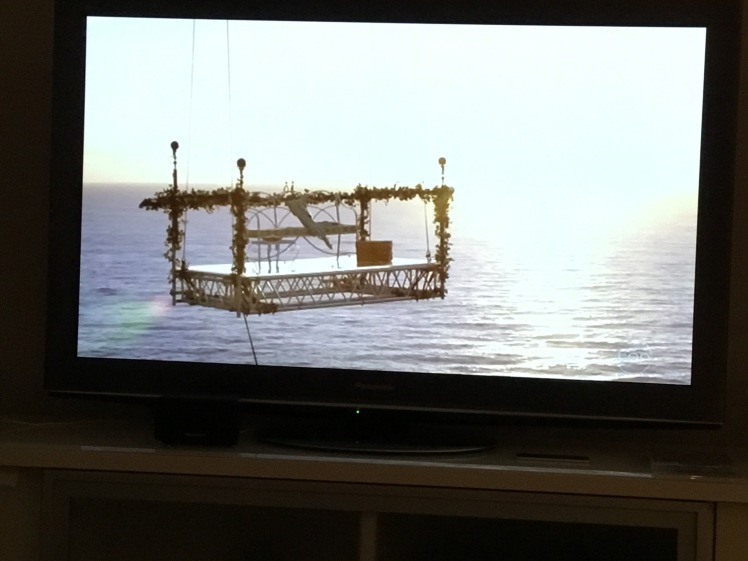 13 – I thought that was a surrender flag flapping in the breeze, but never fear – it’s a sea green throw rug:

14 – Nothing screams romance like being strapped into a harness by the neck. Christian Grey, eat your heart out:

16 – Oh. Not quite King of the World Kate ‘n Leo style when you have to stand side by side for your own safety #tipitover

20 – They are both wearing denim and it keeps reminding me of that time JT and Britney double denimed to the Grammys.

21 – I haven’t heard Megan make a conversation about anything other than how much she loves the ocean. I’m beginning to think she’s one of the Mako mermaids.

22 – Okay, okay, the Tuscan Villa is actually bigger in the daylight.

23 – No idea who the girl playing cards with the Yogi is. Which makes me think she possibly just snuck in for some poker shakedowns #housealwayswins

24 – Love the way someone is casually holding a racquet like they just casually stepped off centre court.

25 – Seriously, who decorated this house?! The 50’s wants its wallpaper back.

27 – There is no end to Bingle trying to bring the choker back. STOP TRYING TO MAKE FETCH HAPPEN.

28 – Tiffany bang up declares on national TV that she needs some action.

30 – Bingle, no one has rollerbladed since 1999. And I still have the bruises to prove it.

32 – “I’m not the best wordsmith” awwww Bananaman is self aware.

33 – He is falling hook, line and swing!
34 – That moment you realise what was causing that thorny feeling in your pants… Sitting on a rose:

36 – Honestly, if all it takes to impress a man like Richie is to take your shoes off at a party, I’ll have ’em lined up round the block.

39 – She couldn’t be with someone who doesn’t love nature?! Ease up, Attenborough, we get it – oceans, trees, they’re all your bag baby.

40 – Richie mans up with the kiss. And we are getting 3 camera angles of it so it’s definitely not like the producers are yelling GET IN THERE!!!

41 – Oh dear… Who says “nice kiss” after a kiss? Moment killer. Also hasn’t he said that to someone else too? Is that his… THING?!

42 – Game over – the other 20 odd trash bags should just go home now. Mako Megan has this in the bag.

45 – Is there anyone on this show who is not from WA? It’s like all the single women in Perth have decided they stand way more chance going in a harem on national TV than trying their luck at Mint nightclub on a Friday night. (Even though they do play 90s music all night, Jess :D)

47 – Did Bingle just call herself a princess who only does yoga? And yet the way she drapes that leather jacket round her shoulders like Rizzo from Grease conveys she’s the type of slapper that’d be bang up for anything. Also the actual Yogi isn’t complaining is she?

49 – I’ve secretly always wanted to try roller derby but my knees say no, no, no. I’m really hoping this episode ends in #stackson

50 – Whoever decided to cross roller derby with Sumo suits is a TV PRODUCING GENIUS and I tip my hat to them.

52 – OMG BINGLE DRESSED THIS WAY IS EVERYTHING: 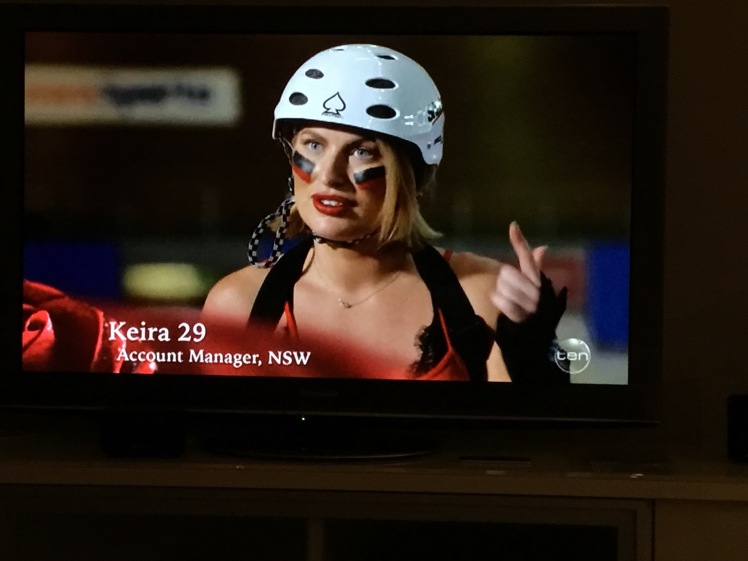 53 – What is not to love about any of this, it’s like Swan Lake on wheels:

55 – Noni B is totally looking for a bacon waffle.

57 – I still insist my sweep pick Ontop looks like a Russian tennis player. Who apparently lacks any conversation skills… Geez the size of her “walls” would put the one in China to shame.

58 – Oh and now she’s told him she wants to go back to the group. Sigh. I may as well Sharpie cross out her face now #theresalwaysnextyear

59 – Cocktail party time! Quote of the episode “Do you think there is going to be drama tonight?” If there’s not, the producers ain’t getting paid!

60 – I have no idea who the brunette in blue is but Bingle’s choker look has sadly rubbed off onto her.

61 – Fashion crime alert – it appears to be chokers all round tonight! There’s the “just been lassoed” version: 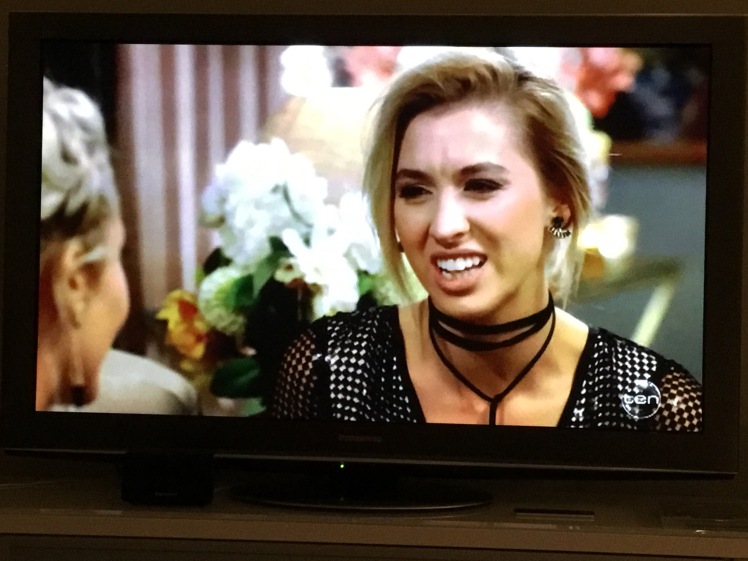 And the classic “put my neck through the wrong hole on the dress” choker:

62 – That, and huge earrings. Bingle looks like a swarm of glitter has nested in her ear whilst Ontop is wearing a couple of pine cones she found in the Tuscan garden:

63 – “I heard about Megan kissing a boy” – umm which boy, a cameraman? A producer? This ain’t a Blue Light Disco. There is 1 guy. Do the maths Alex.

64 – I feel like we are not seeing anywhere near enough cocktail party action this season. Two seconds of Richie leading Alex up the garden path *sorry, up the stairs to their secret hideaway* is not enough crazy!!! Where is Eliza and her singing?!

66 – I love that we have a Kiki and a Nikki and a Tiffany this year.

67 – Ontop is out and this genuinely upsets her comrade Sasha. Tiffany has gone from first rose to bowing out in blaze of vomit glory. And the Disney obsessive realizes that if the shoe fits, you just have to wear it. 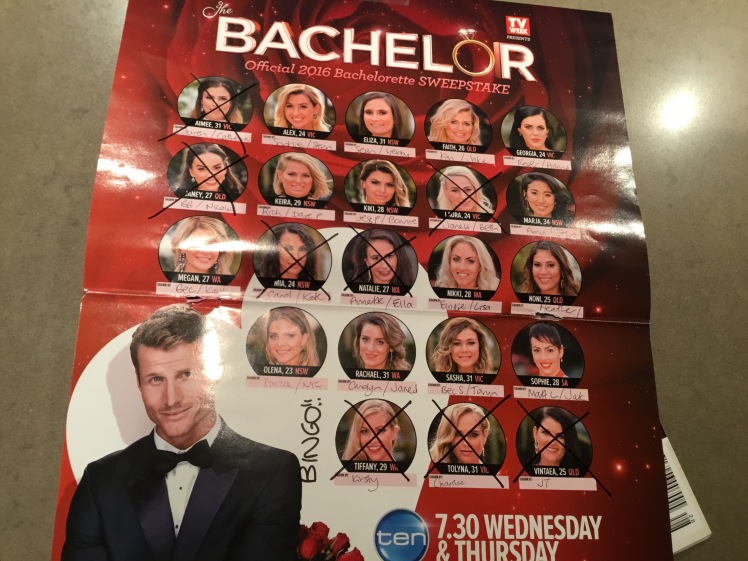